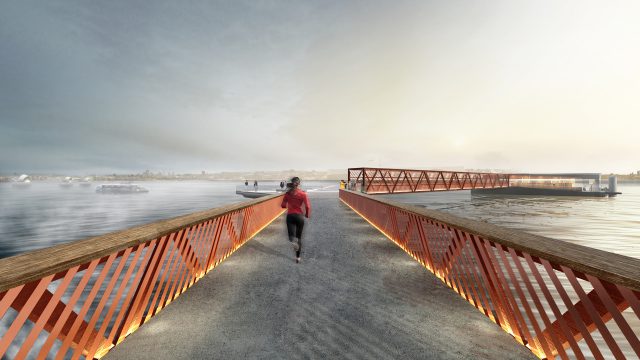 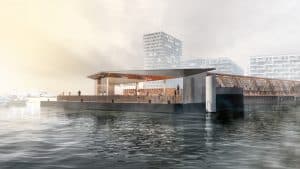 Passengers will soon be able to travel to London City airport by boat thanks to a 130m-long pier being built next to the Thames Barrier in Silvertown.

The £5 million project, due to be finished by the early autumn, will also allow those landing there to leave for places including the O2, Canary Wharf and the City every 15 minutes using Thames Clippers catamarans, which carry four million customers a year.

They will from the pier, part of the new 3,000 home Royal Wharf development on the north side of the river, through a landscaped avenue and up to the departure lounge. 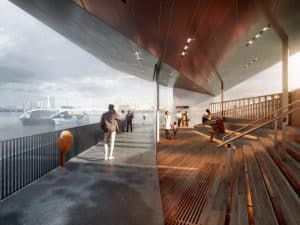 The pier, designed by the architects Nex, can cope with a tidal range of 7.5m as well as the impact of a riverboat crash.

It comprises two sections in a dogleg. The first part draws on traditional British seaside architecture and culminates in a viewing platform to frame vistas of the Thames in both directions. The second consists of a gangway that leads down to the pontoon supporting the riverboat terminal, with a wooden, metal and glass sheltered waiting area.

Engineers have had to demolish an old refuelling derrick and faced the danger of unexploded bombs dropped on the Docklands during the Blitz. Alan Dempsey, the founder and director of Nex, said: “London has often turned its back on the river, so we’re trying to put the Thames at the centre of people’s lives once more.”

Less is more for booming City airport
London City airport served a record number of passengers last year despite being used by fewer aircraft (writes Robert Lea). The airport has carved out a reputation for shuttling bankers on small regional and business jets from London Docklands to the financial capitals of Europe, but more holidaymakers are choosing to avoid the congestion at major airports such as Heathrow, which is 16 times bigger, and Gatwick.

By welcoming larger, more fuel-efficient planes the airport was able to meet growing demand for weekend leisure, skiing and beach breaks with a smaller fleet. It handled 4.8 million passengers last year, compared with 4.5 million in 2017. About two thirds of the aircraft that are now using City are capable of carrying more than 100 passengers.

A housing boom in east London has also led to more business from local residents, whose noise objections have hampered City’s plans for expansion. They will welcome the use of fewer and quieter aircraft but it is unlikely to last. A £500 million makeover that will quadruple the size of the terminal and add eight new aircraft stands has put the airport on track to carry a maximum of 6.5 million passengers a year by 2025.