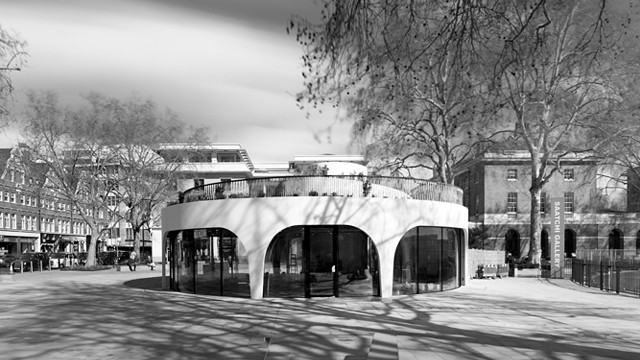 Danish Embassy and Duke of York Restaurant with Alan Dempsey

This building visit led by Alan Dempsey of Nex—, will start at the Danish Embassy designed by Arne Jacobsen and move to the Duke of York Restaurant designed by Nex—. The conversation will be co-led by an AA PhD candidate.

The Danish Embassy in London was designed by the Danish architect Arne Jacobsen. It is a purpose-built embassy in modernist design, which houses the chancellery functions as well as the ambassador’s residence. The design was made in respect to the scale and the traditional composition of buildings in the area, while at the same time creating a functional entity. The visible structure of the embassy comprises of stacks of glazed boxes, cantilevered out from concrete walls.

The Duke of York Restaurant

Designed by Nex—, The new Duke of York Restaurant occupies a prominent position on the King’s Road. The form of the building responds sensitively to the adjacent Grade II listed screen wall of the Duke of York Headquarters.  A counterpoint spiral of ribbon like off-white concrete leads to a public roof garden, supported on glazed arches. At ground level, the interior is designed with a desire to create a restaurant for all seasons, which connects interior and exterior. A technical world first — the innovative curved glazing can lower into the basement, allowing alfresco dining in fine weather.

Alan is the founding Director of Nex—, Alan leads the design of all projects at Nex— , a London based architecture studio that designs buildings and spaces defined by place, people and atmosphere.  Alan graduated from the AADRL in 2002 and taught undergraduate and post-graduate courses at the AA from 2005-2013. Alan’s work has been recognised with awards and commendations from the D&AD, The Architects Journal, UK Technology Strategy Board, World Architecture Network, Building Design, and the Architecture Foundation. He has been an invited speaker at the AA, NAI, CAFA Beijing, ETH, MIT and other international venues.

AA Building Conversations brings together practicing architects and AA members to discuss in-situ how existing buildings in London have influenced, sharpened or challenged the architects’ own practices and understanding of the discipline. The conversations will be triggered by an AA PhD student, and will be a collective construction among all those present. This project has been initiated by Gabriela Garcia de Cortazar (AAPhD 2016), and realised by AA membership and AA PhD candidates Sofia Krimizi & Alvaro Velasco.

Open to AA Members. Click here to book your place.

All lectures are open to members of the public, staff and students unless otherwise stated.